I work in an industry that only 1% of the population is addicted to… but we will always spend $300.00 on a pair of jeans that turn us on!

Check out this article Written By: Christina Binkley at christina.binkley@wsj.com

Shoppers Shell Out More for Designer Denim, Lured by Signature Details, ‘Made in America

It is an enduring mystery to anyone reared on $50 Levi’s: How can a pair of jeans cost as much as the Phantom, the new look from True Religion that will be priced as high as $375?

The answer can be found here in Los Angeles, in the global capital of so-called premium denim—one of the few areas of fashion that remains largely American-made. An industrial zone here near the city’s center is home to True Religion, J Brand, Seven For All Mankind and other pricey denim brands that have elevated what was once workman’s togs to a luxury industry all its own. This is a rarefied segment of the denim business. Americans bought $13.8 billion of men’s and women’s jeans in the year ended April 30, according to market-research firm NPD Group. But only about 1% of jeans sold in the U.S. over that year cost more than $50.

See how the production costs add up for a pair of True Religion jeans. 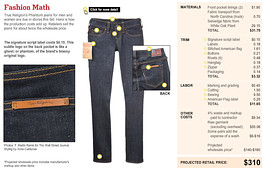 The prices of “premium” jeans—industry jargon for luxury-priced denim—appear to be edging slightly upward after a downturn following the financial crisis. Right now, J Brand’s Maria women’s jeans can sell for $226. Men’s Aidan jeans from Seven For All Mankind cost $225. Prices for Gucci jeans range from $495 to $665. Premium jeans are made in the U.S., which is a big part of their allure. Gloria Vanderbilt and Calvin Klein introduced the world to so-called designer jeans decades ago, and what began as a relatively small trend endured. Jeans are worn everywhere from the office to the opera these days. But there is a less-than-subtle caste system for denim: A pair of “Sevens,” as some call jeans from Seven For All Mankind, conveys a statement about one’s fashion savoir faire (and income) that less expensive brands don’t. It costs about $50 to make a pair of Super T jeans, True Religion’s best-selling style with oversized white stitching, estimates founder, chairman and chief executive, Jeff Lubell. The wholesale price is $152, he says, and the average retail price is $335. Of course, plenty of these jeans sell at substantially less than full price. F. Martin Ramin for The Wall Street Journal, Styling by Anne Cardenas.

True Religion’s top-selling jeans, the Super T, cost about $50 to make and sell wholesale to retailers for $152 a pair. The average price in stores is $335. They feature white stitching on the back pocket and around the waistband. 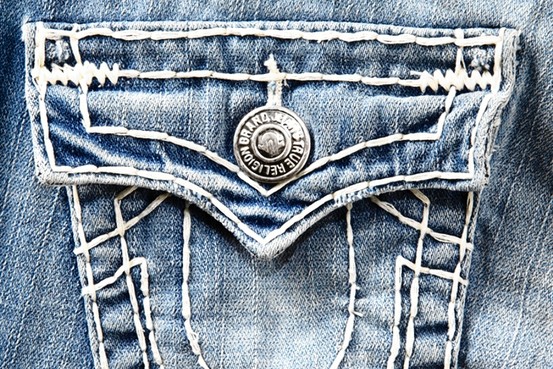 Hunting for The Perfect Pair of Jeans can be an arduous challenge. With a few clicks, WSJ reporter Alina Dizik tries online made-to-measure jean shopping via sites IndiDenim, Thiumbler and MakeYourOwnJeans.

The Phantom was first shown to retailers in January, and True Religion is building its fall marketing campaign around the jean. With less prominent logos and detailing, it resonates with the current antilogo trend in fashion, but its details are designed to appeal to real “jeaners,” as Mr. Lubell refers to premium-denim lovers. It has a small American flag hand-embroidered on the waistband. A subtle logo on the pocket is like a ghost, or phantom, of the brassy original logo. “The Phantom is my Ferrari 458 Italia,” says Mr. Lubell. “It’s the newest, hottest baby of mine.” As with all fashion, a big part of the price of luxury denim is in the multiple profit margins taken at each level of production. Most any piece of clothing contains parts and services from potentially dozens of providers: from fabric and button makers, to designers and seamstresses, and wholesalers and sales agents. After all this, designers and retailers say the typical retail markup on all fashion items, including jeans, ranges from 2.2 to 2.6 times cost. 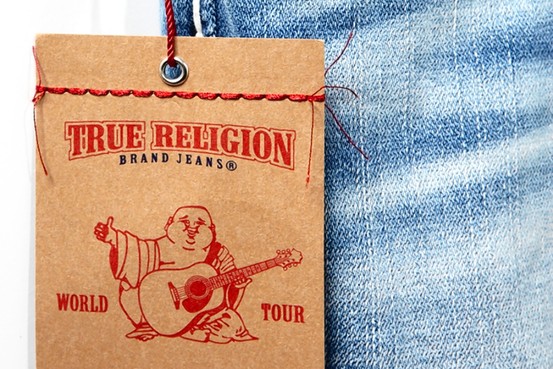 In the luxury business, those mark-ups cover huge marketing budgets (someone has to pay for giant billboards and ads in fashion magazines) as well as the costs of running stores, headquarters, shipping, and other overhead. The profit margins on premium jeans can be substantial. Mr. Geliebter says his gross profit margin for private-label jeans, which he makes for Wal-Mart Stores Inc., Sears Holdings Corp. and other retailers, are less than 20%, whereas the margins for his own premium lines are 40%-to-50%.

It seemed a few years ago that the high end of the denim business was doomed, with the financial crisis killing many consumers’ appetites for expensive jeans. Premium-denim makers cut back on styling and details, and cut prices in many cases to under $200. Manufacturers hit a price floor at around $150, mainly because premium denim is manufactured primarily in the U.S., which can’t compete China and other nations with low labor costs. Beyond the rise, or waistband height, and leg silhouette—bootleg, skinny, or cigarette—the details that make jeans brands stand out are often on the pockets. J Brand’s pockets are unadorned, while True Religion is known for its highly stylized pockets with swirly embroidery. Jeans brands also try to stand out from season to season by using patented materials, such as rivets and stitching, and by using special washes and distressing methods. These might involve dying, pressing, and even using sandpaper and drills on the raw jeans. These methods can be particularly expensive when done in the U.S., where factories must meet more stringent environmental and labor standards than in many low-cost nations. Most premium jeans’ cotton denim fabric comes from the primary maker of high-end denim fabric used in the U.S. and Europe: Greensboro, N.C.-based Cone Denim, a unit of the International Textile Group. There, in a plant known as White Oak, shuttle looms dating from the 1950s weave the denim fabric that winds up in many premium denim brands, including J Brand. The looms are older, narrower, and slower than highly efficient modern looms, but they weave fabric with slight irregularities known as slubs, which impart a texture and character that modern looms lack. Delores Sides, a spokeswoman for Cone Denim, says most of the weavers employed there have at least 20 years of experience, and one woman has being working at the mill for 55 years. They are employed full time and are paid benefits such as health care, she says. 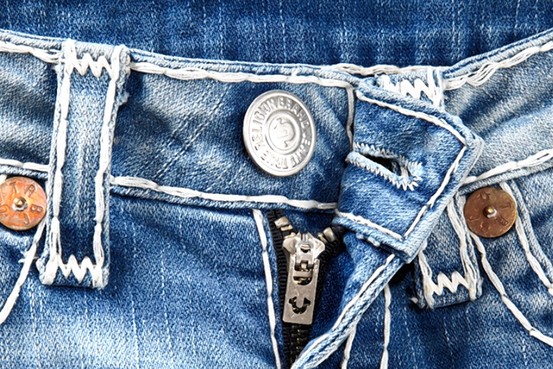 The Cone fabrics are shipped by truck or train to Los Angeles, where denim brands cut and sew them to their designs. Each part and bit of labor may ultimately be marked up five times or more before the pants reach retail stores. So the $23.30 spent for a Los Angeles-based seamstress to sew a pair of Super Ts will cost the consumer more than $100 at full price. Other notable costs include roughly $10 worth of fabric (1.8 yards a pair, on average), 44 cents for pocket linings, 37 cents for a zipper, and $2 for the embroidery on a back pocket. Washes for coloring and fading may be done in Los Angeles or, sometimes, at mills in Mexico.

To be produced domestically, jeans have to be priced at “$200-plus,” says Shelda Hartwell-Hale, a vice president at Directives West, an L.A.-based division of fashion consulting firm Doneger Group. Jeans makers say that manufacturing in the U.S., in addition to appealing to consumers, allows them to move quickly. When Jeff Rudes, founder and chief executive of J Brand, saw designer Jil Sander’s electric colors in New York’s Jeffrey boutique earlier this year, he asked his designers to come up with a hot pink and an emerald green color for jeans. Five days later, the first, small run of jeans were shipping into Barneys New York. Mr. Rudes says it typically takes his company six to eight weeks to make a pair of jeans in the U.S., compared with three to six months in China. True Religion is one of the industry’s giants, making 4 million units of clothing a year. He estimates that his $300 jeans could sell for $40 if he manufactured in China. Still, Mr. Lubell has caved when it comes to jackets, the cutting and styling of which is more complex than pants. He makes them in Mexico, where costs are higher than in Asia, but less than in the U.S. The jackets retail for about $375. “If I made them here,” he says, “they would be about $600.”

powered by WordPress and The Clear Line Theme